Ascension of the Watchers

. .. “THESE ARE THE WORDS THAT ECHO THROUGH MY UNCONSCIOUS”

Ascension of The Watchers, the creative journey of Burton C. Bell (Fear Factory and G//Z/R) and John Bechdel (False Icons, Fear Factory, Killing Joke, Prong, Ministry, and Murder Inc.), is a vision born of life, love and spirituality. The intimate nature of Ascension of The Watchers is envisioned to draw the minds, hearts and aspirations of a people to a higher level of thinking and feeling by bringing them together in celebration and reflection in the beauty of life and spirituality, through these melodies and words.

In early 2002, Burton retreated to the quiet simplicity of rural Pennsylvania for seven months with his friend and musical confidant John Bechdel, to escape the onslaught of Los Angeles . A mentor in music, philosophy and demeanor, Bechdel unwittingly guided Burton along the path to this project.

In 2005 “Iconoclast” was released on Limited Edition Vinyl and CD along with other items designed and created by AOTW.

The next chapter of the Watchers saga began to unfold in 2007 as Burton signed with Al Jurgensen’s 13th Planet Records. New material was recorded and previously conceived songs were reworked into their final realizations by Burton and John with the addition of Edu Mussi (Echoes And Shadows, Still Life Decay) and contributions from Al Jourgensen, the late Paul Raven and Ben Bell. Numinosum, the debut Ascension of the Watchers album, was released on Februray 19th and is available from Thirteenth Planet Store.

AotW returned to the stage for a short tour to celebrate the release of Numinosum. Watchers Burton and John also performed as part of Ministry on their farewell CULaTour. AotW then ventured out in support of Killing Joke on their US dates. Burton, John and Edu were joined for these shows by new Watchers Vinnie Signorelli on drums (Swans and Foetus) and AleX on bass (Echoes & Shadows). What is next is yet to come! 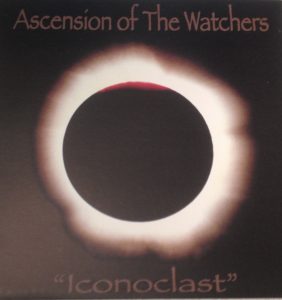